Charlestown, Nevis (Sunday, May 28): The Executive Committee of the Nevis Reformation Party (NRP) and party supporters joined congregants at the St. Thomas Anglican Church on Sunday, (May 28), to pay respect to Nevis’ First Premier, NRP foundation member, leader, and National Hero, the late Right Excellent Sir, Dr. Simeon Daniel, NH, who passed away on May 27, 2012, aged 77 – five years ago, Saturday. 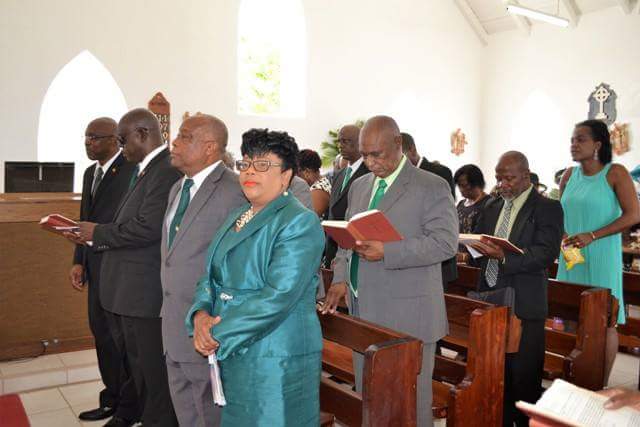 Members of the Nevis Reformation Party and Candidates at the St. Thomas’ Anglican Church

Among the scores of celebrants was Daniel’s widow, Lady Sheila Daniel and other family members who gathered at the St. Thomas’ Anglican Church, the former leader’s home parish, where Daniel worshiped throughout his lifetime.

After the service led by Father Dean Rudolph Smithen, who himself grew up in Daniel’s home village of Barnes Ghaut, the NRP executive gathered at Daniel’s graveside where prayers were said, tributes given and wreaths were laid.

Former Premier of Nevis and Leader of the NRP, Hon Joseph Parry

According to Former Premier, party leader and long-serving representative of the St. Thomas constituency, the Hon. Joseph Parry was proud and happy that the NRP Executive chose to join with the church congregants to pay tribute to Daniel’s outstanding life of service.

Parry said under NRP and Dr. Simeon Daniel the country progressed well. “During his illustrious career, Daniel, widely regarded as the Father of Modern Day Nevis, was credited as being a trans-formative leader.

“His NRP government created the first Nevis Sixth Form College in 1980, returned government to Nevis through the Nevis Island Administration in 1983, strengthened the island’s banking system through the institution of the indigenous Bank of Nevis in 1985, and brought the Four Seasons Resort to Nevis in February 1991, ensuring the first payday for hundreds of Nevisians,” said Hon. Parry. 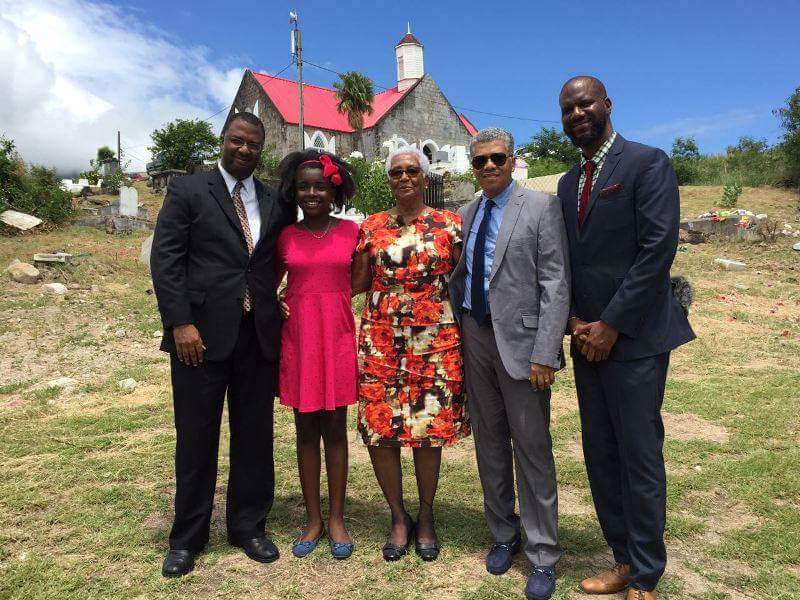 Daniel also inspired the first comprehensive land reform program in the OECS through the Nevis Housing and Land Development Corporation (NHLDC) in 1984, which made it possible for every Nevisian to get “a piece of the rock” and a home leading to Nevis’ housing program being among the best in the sub-region.  He also brought the offshore industry in 1984 as an important pillar of the Nevis economy.

The revered leader revolutionized infrastructure – bringing roads, water, electricity, telephone and cable television to every nook and cranny of the island, and ensured Nevis had a strong cadre of young educated persons to take the island forward, through initiatives in education, including programs with the University of Miami and Miami -Dade College.

Daniel also served as a member of the St.Kitts-Nevis Federal Cabinet (1983- 1992), but unlike today’s leaders, Vance Amory and Mark Brantley, who monthly tax the nation for double salaries,(in spite of a stagnant economy), Daniel and his colleagues exemplified “COUNTRY ABOVE SELF”, and gave unselfishly of their service.

“I take great pleasure in recognizing the outstanding contribution and the long, distinguished service of a true Nevisian and Kittitian hero for the role that he has played in the creation of modern Nevis and the advancement of the Federation as a whole,” said Dr. Douglas.

Reflecting on his life, at Dr. Daniel’s graveside tribute, Lady Daniel raised her right hand, touching her forehead, making the sign of the cross, with the words: “Hail to the man!“  She went on to say, “I am happy to be here and I am happy and appreciative to all that came out.  Please remember Sim.  Sim we  love you!”

*This article was posted in its entirety as received by SKN PULSE.  This media house does not correct any spelling or grammatical errors within press releases and (or) commentaries. The views contained within are not necessarily those of SKN PULSE.